The Cosmopolitan Of Las Vegas from $132/nt

4th of July in Las Vegas 2022: Your Ultimate Guide to Celebrating with a Bang 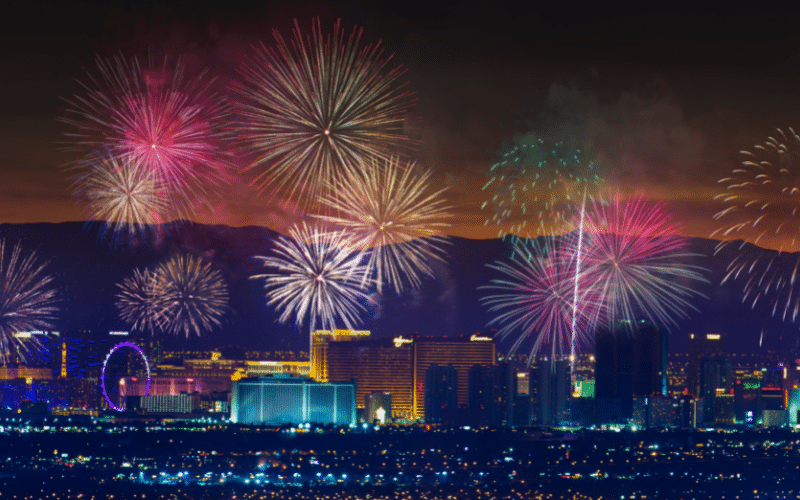 If there’s any city that knows how to put on a light show, it’s Vegas. It’s no wonder thousands of people from all over the world flock to the Las Vegas strip to celebrate the 4th of July each year. With incredible fireworks displays happening all over the city, it’s a party that’s not to be missed. We’ve put together this guide on how to spend your 4th of July in Las Vegas so that you can plan an incredible Independence day from start to finish. From where you can find the best BBQ to where you can catch the fireworks, we’ll cover it all.

1. Spend the Day at a Vegas Pool Party

No one parties like Las Vegas. And the heat doesn’t stop us. Summertime is pool season in Vegas, and we have some of the most extravagant pool parties in the world. Vegas dayclubs are just like nightclubs, but during the day and in a pool. You don’t have to be invited to these parties – you just have to love dancing to really good music and sipping on cocktails while floating around on a giant inflatable flamingo. Here are our favorite dayclubs in Vegas.

Ask any Las Vegas local and they’ll tell you – Encore Beach Club at the Wynn is quite simply the best dayclub in town. With more than 60,000 square feet of pool area, including gaming areas, VIP bungalows and a killer sound system, Encore Beach Club (lovingly known as EBC) is the ultimate Vegas pool party. Featuring world-famous DJs like Kygo and the Chainsmokers, EBC is always pumping with energy, good vibes and beautiful people.

An extension of Marquee Nightclub (which is one of our top 10 Vegas nightclubs), Marquee Dayclub is a pool party experience like no other. Located at The Cosmopolitan, you’ll be partying high above the Las Vegas Strip with a sweeping view. Marquee Dayclub is the ultimate spot to soak in the sun while staying cool. Sip on a specialty cocktail and nibble on food from the signature menu while you enjoy the resident DJ spinning upbeat dance music.

Wet Republic is MGM Grand’s 6,000 square-foot dayclub and has “everything an over-the-top party should have,” according to Haute Living. That includes salt water pools, a 2,500 open-air lounge serving signature cocktails, luxurious bungalows with bottle service, and the hottest DJs and performers providing the atmosphere. Thrillest calls it the Best Pool Party in the US, so you need to experience it for yourself.

Catch your favorite DJs and performers while relaxing on a plush daybed at Daylight Beach Club, located at Mandalay Bay. With a 50,000 square foot pool deck including VIP luxury cabanas with their own private pools, this dayclub gives you a Vegas pool party experience you’ll be writing home about. Sip on a signature cocktail or take a dip in the wave pool to beat the summer heat the Las Vegas way.

2. Eat at the Best BBQ Joints in Vegas

No 4th of July is complete without chowing down on barbequed meats. When you’re visiting Las Vegas, there’s no reason why you can’t enjoy this tradition. Vegas offers some seriously mouth-watering BBQ joints where you can eat pulled pork, brisket and baby back ribs to your heart’s content. Here are some of our favorite barbeque restaurants in Las Vegas.

Located right next door to the world famous Gold and Silver Pawn Shop, this BBQ joint is one of the best in Vegas. Rick Harrison from the TV show “Pawn Stars” has partnered up with Rollin Smoke Barbeque to bring you delicious Southern food you have to taste to believe. Their menu features a brisket, pork and hotlink sandwich, fall-off-the-bone BBQ ribs, as well as favorite Southern sides like BBQ beans and smoked mac n cheese. They also have an all-you-can-eat option where you can sample everything off the menu with a pitcher of PBR beer.

Circa Las Vegas brings locals and visitors alike some of the best barbeque in Vegas, served from the Fremont Street Experience’s only permanent food truck. Feast on delicious, freshly smoked BBQ while relaxing on the restaurant’s “back yard”. Featuring all the favorites, Project BBQ also serves up unexpected dishes like barbeque street tacos, smoked brisket empanadas, and a customer favorite called the Garbage Bowl.

Located in the bustling Linq Street Promenade, Virgil’s Real BBQ brings Southern smoked flavor to Las Vegas locals and visitors alike. Their meats are smoked right there in-house at a low temperature for 14 hours, using a mix of hickory and fruit woods for amazing flavor. Their BBQ chicken wings are hard to beat, with a rich, smoky flavor and a little bit of spiciness. We love their Southern Style Surf & Turf, with grilled shrimp and your choice of BBQ meat.

Located at Treasure Island, Gilley’s BBQ serves mouth-watering country favorites in a dining room that looks out over the Las Vegas Strip. Their baby back ribs are divine – hand-rubbed with Gilley’s special spices and pit-smoked for 3-4 hours over a mesquite fire, then slathered with sauce. We love their Brisket “Filet”, slow-braised in apple juice and smoked over mesquite. Gilley’s Saloon features line dancing, live music, and even a mechanical bull!

Things get pretty jam packed on the 4th of July, with people crowding to the Las Vegas Strip to watch the spectacular fireworks display. Multiple hotels take part in the synchronized display, including Caesar’s Palace, the Aria, Treasure Island, The Venetian, Planet Hollywood, the STRAT, and the all new Resorts World. That means no matter where you are on the Strip, you’ll be able to get a view of the pyrotechnics. The fireworks start at 11pm.

If you’re staying in Downtown Las Vegas, you can catch the 4th of July fireworks display that The Plaza Hotel goes all-out for every year. Main Street shuts down for pedestrians to use, and at 10pm the fireworks shoot off from multiple areas of The Plaza’s property.

If you want to avoid the chaos of Downtown and the Vegas Strip on 4th of July, you can still catch stunning fireworks displays at Red Rock Resort in Summerlin and Green Valley Ranch Resort in Henderson. These displays are perfect for families, and don’t hold back on the spectacular pyrotechnics. These fireworks displays start at 9pm.

Best Possible View: From a Helicopter

Want to get a bird’s eye view of the magic that is the 4th of July in Vegas? Book a helicopter tour and watch the whole city light up with fireworks below you. This 2 hour helicopter tour starts off with a limo ride to the terminal and flies over the Las Vegas Strip. Or you can witness the natural wonder of Red Rock Canyon from above before flying over the bright lights of the Strip with the Neon & Nature helicopter tour.