The Cosmopolitan Of Las Vegas from $136/nt 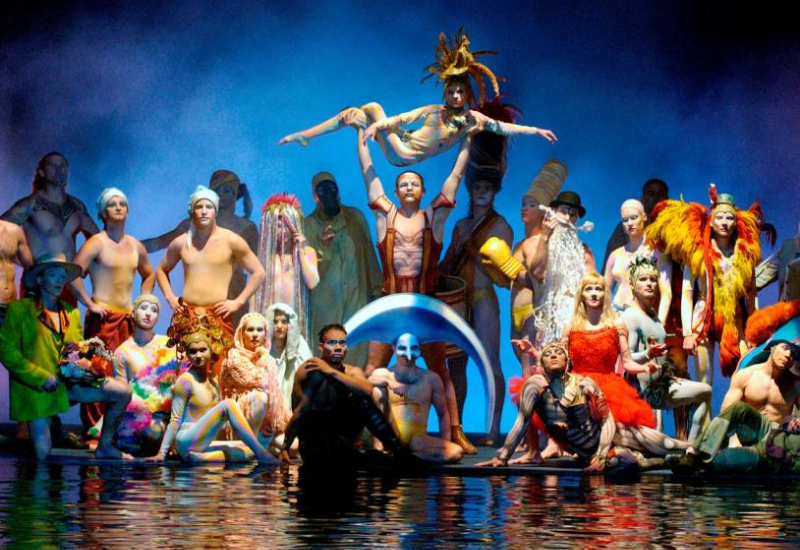 Las Vegas has a reputation as the Entertainment Capital of the World, with world class shows that will make any audience member’s jaw drop. If you’re planning on visiting Vegas and want to see one of the shows that puts our city on the map, get tickets for a Cirque du Soleil show. There are 6 of them that perform on the Las Vegas Strip, each with their own distinct style and feeling. We’ve put together this guide to make it easier to choose which Cirque show in Vegas you’ll love the most.

“O” will take your breath away in many ways. Performed in a theater at Bellagio that looks and feels like a European opera house, this is a stage show that doesn’t fit any category. The stage of this beautiful theater is a swimming pool, a creative concept that only scratches the surface of the imaginative energy of the show.

“O” features some of the world’s best circus performers, from synchronized swimmers to acrobats, fire spinners to divers. There isn’t much of a linear storyline in this show – rather it’s like watching a work of art being created.

This is definitely the most romantic Cirque du Soleil show, largely because of the elegant atmosphere and beautiful imagery. In saying that, “O” is suitable for the whole family. If you sit in the front rows, you might get splashed!

This vibrant, energetic and uplifting Cirque du Soleil show celebrates the musical works of The Beatles – but don’t be fooled into thinking it’s just for diehard Beatles fans. Their reimagined songs form the background of a wildly colorful and immersive performance. For some of the songs you’ll see world-class acrobats performing stunning aerial feats, while others feature high-energy dance routines.

This show became a reality after 2 friends got together and had a discussion: George Harrison and Guy Laliberte, one of Cirque du Soleil’s founders. The soundtrack, created by surviving Beatles members, family, and friends, has won 3 Grammy awards.

The Beatles LOVE is performed at The Mirage on a 360 degree stage, so depending on where your seats are located you’ll get an entirely different view of the show from other seat choices. The furthest seat from the stage is only 98 feet away, while the closest is just 2 feet from the action.

Cirque du Soleil got together with the Jackson estate to make what Rolling Stone calls “a virtual parade of ‘wow’ moments” – a Cirque show that highlights the creative genius of the King of Pop, Michael Jackson. Michael Jackson ONE is exhilarating, breathtaking, and (in many parts) emotional.

Anywhere you sit in the theater, you’ll be immersed in the excitement of the performance. The show doesn’t just happen on the stage – there’s performers climbing the walls, flying through the air, and hanging suspended above the crowd. The state of the art sound system includes speakers in each chair’s headrest.

Michael Jackson ONE, which performs at Mandalay Bay, takes you on a journey through the hit songs of the legendary artist expressed through stunning dance numbers. Acrobats, aerialists, tight-rope artists and trampoline performers are constantly in action, making this an exciting show for all ages.

This enchanting Cirque show, which performs in its own dedicated theater at Treasure Island, sweeps you away to a whimsical dream world that will leave you with a childlike sense of awe. The visual beauty of Mystere is breathtaking, with sets and costumes that seem to have been created from pure imagination.

Mystere features world-class acrobats, aerialists and circus performers whose extraordinary feats will make your jaw drop. The Las Vegas Sun calls this show “a tribute to the artistry of the human body – graceful, athletic, capable of performing feats that challenge our vision of the real world.”

The playful, joyful tone of this show makes it a favorite for many Cirque fans, and a good choice for families. If you want to see a Cirque du Soleil show that encompasses the essence of what they do, this delightful show is a must-see.

This action-packed Cirque du Soleil show is different from any of the other Cirque shows in Vegas for a few reasons. Firstly, KA is led by a more distinct storyline than other Cirque shows. It focuses on a pair of twins who are separated and their journey to find each other, running into all kinds of conflict along the way. That conflict takes the form of thrilling martial arts and impressive physical feats.

The set for KA, which performs at MGM Grand, is another thing that sets this show apart. Instead of a normal stage floor, giant platforms move and reconfigure for each scene, leaving what appears to be a bottomless space below. Pyrotechnics, puppetry, and multimedia projections bring even more excitement into the mix.

The warriors fight on battlefields both in the earth and in the sky, at one point climbing up a vertical stage while fighting off enemies. The Los Angeles Times says KA “may well be the most lavish production in the history of Western theater. It is surely the most technologically advanced”.

Performing in an intimate theater that gets every audience member up close to the action, Mad Apple begins with a pre-show consisting of an on-stage bar and roaming magicians. Once the show begins, you’ll be non-stop entertained with stand-up comedy, a band that plays renditions of classic New York hits, a fashion runway, a basketball slam-dunk contest… and even more.

So yes, in other words, Mad Apple is a Las Vegas variety show. But it’s different from anything you’d expect in that type of show. It’s a party in a theater. It’s a love letter from Vegas to New York City.