Delano Las Vegas at Mandalay Bay
from $71/nt
Get $60 in Food Beverage Each Night!

Mandalay Bay Resort And Casino
from $49/nt
Get $50 in Food Beverage Each Night!

Harrahs Las Vegas from $24/nt
The Strat Hotel, Casino and Skypod
from $13/nt
January Sale Save 20%!

The Strat Hotel, Casino and Skypod from $13/nt

Green Valley Ranch Resort and Spa
from $110/nt
Up to 35% off Room Rates For Current Service Members and Veterans!

The Basic Rules of Vegas Poker: A Beginner’s Guide 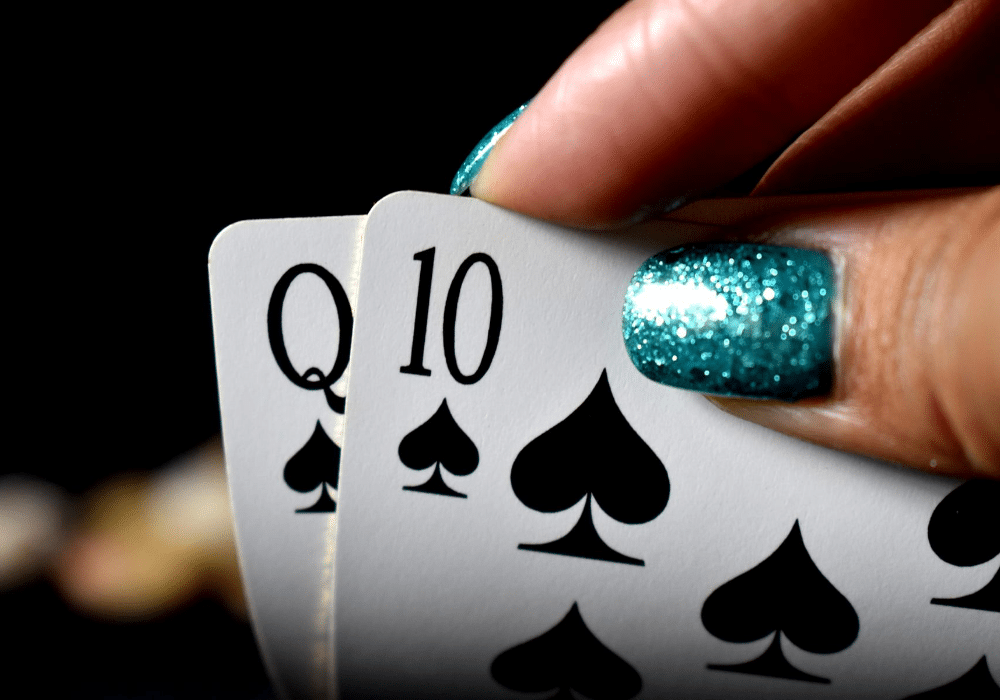 When you think of Poker, you think of Las Vegas. The two go hand-in-hand. You’ll find poker tables everywhere you look in Vegas, and most likely there will even be a table in your hotel. Want to give it a go? It may seem complicated and daunting at first glance, but it’s not too hard to learn the basic rules and start having fun (and winning money!). This is our beginner’s guide to the basic rules of Vegas Poker.

A bit stuck? Take a look at our glossary of poker terms.

Poker Card Ranking: What Beats What

The best place to start learning about the ins-and-outs of poker is getting familiar with what makes a good hand. Take a look at the ranking of poker hands below, which are listed from best to worst. Even though there are quite a few different forms of poker, the ranking shown here is always the same.

Getting a Royal Flush is the most uncommon hand to get, and therefore the most valuable hand in poker. It’s comprised of 10, Jack, Queen, King and Ace, all of the same suit.

A straight flush is another rare hand. It is comprised of five cards in numerical order and all in the same suit. It’s not allowed to “wrap around”, as in Q-K-A-2-3.
If there are two Straight Flushes at the table, whichever hand’s Straight flush reaches the highest valued card wins.
Take a look at the examples below. Hand 2 (which has a King) would beat Hand 1 (which only goes up to 8).

Four of a Kind

Four cards of the same numerical rank, and another random card. If there are two or more Four of a Kinds at the table, the hand with the highest numerical ranking wins.
In the example below, Hand 2 would beat Hand 1.

A Flush is comprised of five cards of the same suit, regardless of their numerical rank. In a tie, whoever has the highest ranking card in their hand wins.
In the example below, Hand 1 (with a King) beats Hand 2 (with a Queen).

A Straight is five cards in numerical order, regardless of their suits. Just like with the Straight Flush, a Straight is not allowed to “wrap around”. In a tie, whoever’s Straight reaches the higher ranking card wins.
In the example below, Hand 1 beats Hand 2.

Three of a Kind

Three cards of the same numerical rank, and two random cards that don’t make a pair.

Two sets of pairs, and another random card.

One pair and three random cards. If more than one person has a One Pair, the person with the highest ranking pair wins.

What if no one has anything of value?
Then the player holding the highest-valued card wins. In this situation, 2 is considered the lowest card while Ace is the highest.
In the case of a tie, you move to the next highest card.

Now that you’ve got the idea of how the different hands rank, you’ll want to learn how betting works.

In most games, you must ‘ante’ something just to get dealt cards. The amount varies by game, but is often a nickel. After that, players bet into the pot in the middle. At the end of the hand, the highest hand (that hasn’t folded) wins the pot.

Betting is typically done in clockwise order. When betting gets around to you, you have one of three choices of what to do:

When you call, you bet enough to match what has been bet since the last time you bet. As an example:

When you raise, you first bet enough to match what has been bet since the last time you bet (like what you do when you call. Then you raise the bet another amount. The amount is up to you, but there is typically a limit. Continuing the example above:

When you fold, you drop out of the current hand. You lose any possibility of winning the pot. You do not have to put any money into the pot when you fold.

Betting continues until everyone calls or folds.

Five Card Draw is one of the most common variations of poker, and is the type of poker that is often played at home among friends. Because it is the simplest form of poker, this is where a lot of players start out. Here is a run-down on how this game works.

There are three different types of video poker you can choose from. We’ll take a look at how each game works. But all of them are based on very similar rules:

Let’s take a look at the three different variations of video poker. They are called Jacks or Better, Deuces Wild, and Joker’s Wild.

You can check on the machine you’re going to be playing to see what its payouts are. But the most typical payouts for Jacks or Better are:

This handy chart shows you when to hold’em and when to fold’em.

In this variation of video poker, all deuces become wild cards and can be used to substitute any card. This makes it a whole lot easier to get a good hand, so because of this the payouts are a lot lower:

Take a look at this handy chart if you’re unsure when to hold’em and when to fold’em.

This version of video poker is a cross between Jacks or Better and Deuces Wild. Instead of a 52 card deck, Joker’s Wild is played with a 53 card deck. Can you guess why? Of course, that 53rd card is the Joker. The Joker can be used to substitute any card’s rank and suit. Here’s the pay scale for Joker’s Wild:

With Joker’s Wild, you’ll want to use the same strategy as you would for Jacks or Better. The only difference will be these two things:

Texas Hold’em has become a very popular variation of poker in the last ten years or so. It is the most common type of poker that’s played at casino tables in Las Vegas.
Here are the rules of how to play it:

The player sitting to the immediate left of the dealer is called the “Small Blind”, and the player to his left is called the “Big Blind”. The Small Blind puts into the pot an initial amount that’s equal to half of what the Big Blind puts in. Posting blinds ensures that there is a good amount in the pot to start the game.

Each player is dealt two cards by the dealer. These are called “pocket cards” and will be used to build the best possible hand with five cards.

The players who want to play that hand need to “buy in” to the hand. To do this, they put chips into the pot that equal the Big Blind.

Starting from the little blind and working back towards the dealer, the players bet on their pocket cards. Remember how betting is done? If not, see above by clicking here.

The dealer “burns” the top card of the deck, which means discarding it. He then flips three cards over from the top of the deck, facing up. Another round of betting takes place.

The dealer burns another card, and flips a single card over facing up. Then we have another round of betting.

The dealer burns one more card, and then flips over the final card facing up. After one more round of betting, every player shows what their hand consists of, and the winner is decided.

If you’re just starting out at playing poker, Pai Gow might be a good choice for you. The game moves slower than other variations of poker, and you can enjoy playing for a long time without losing all your money.
Here are the basic rules of Pai Gow…

The goal of Pai Gow is to make not one, but two poker hands – one of them a five-card hand and the other a two-card hand.

Players are required to place a bet before being dealt any cards. In Pai Gow, this is the only bet you’re going to make during the hand. The amount you bet must be within the minimum and maximum limits of the table you’re playing at.

The Deal in Pai Gow

In Pai Gow the deck is comprised of 53 cards (52 cards and one Joker).
Now that every player has placed a bet, the dealer deals out seven cards face down to all of the places at the table.
Even if some seats at the table are empty, the dealer will still deal seven cards to each place.
The dealer also gets seven cards.
The remaining four cards are left face down, and are known as the “muck pile”.

From the seven cards you’ve been dealt, you want to make two poker hands.
The “high hand” (also known as the “big hand” or “back hand”) should look like a standard poker hand.
The “low hand” (also known as the “small hand” or “front hand”) is comprised of only two cards. That means for a low hand to win, it has to be either two high cards or a pair.
Be careful! The five-card hand you are holding must beat the low hand you are holding.
If you get it wrong and don’t follow this rule, you’ll lose your bet. This is called “fouling your hand”.

How the Joker Works

The Joker can substitute for a card in 3 different ways:

Next, the dealer shows his cards. The dealer’s hand is compared to what each player has.
There are four ways it could go:

This chart is a good guide to Pai Gow strategy: